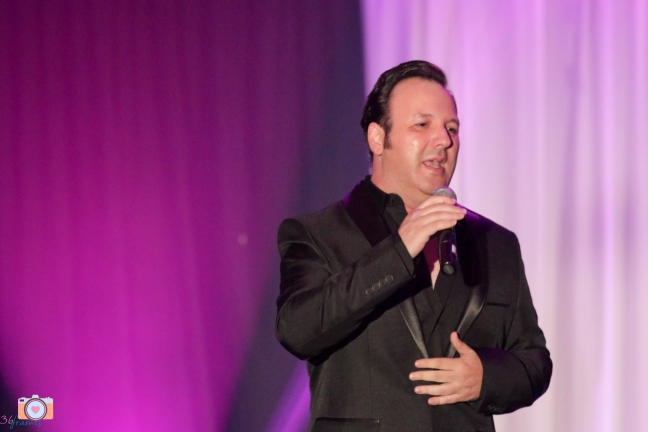 Recording artist and international sensation ZAC HILON, currently the headline act in a musical that is taking Europe by storm, flew to South Africa to perform at the red carpet gala event called DRESS4LIFE. All in support of the Forever Changed Campaign headed by battle weary cancer warrior and friend Addi Lang which took place on the 17th October 2015 at the Maslow Hotel Ballroom in Sandton.

Thanks to INhouse VTM, Gearhouse and Monster Productions and Events, the colourful and vibrantly lit stage was not only filled with world class performers but included the exclusive global premiere of the documentary which was created to provide a roadmap for newly diagnosed cancer warriors filmed by The African Motion Picture Company . Zac’s powerful voice and outstanding entertainment style captured the audience wholeheartedly and he was officially announced as an International Celebrity Brand Ambassador and Influencer and is also the new owner of the original artwork auction piece called “The Butterfly Effect” by DimitriArtworks.

The audience consisted of Media, Radio and TV Presenters, Film Producers and Directors, Advertising Agencies and Production companies and VIP members of the public. Lucky draw prizes of 4 pairs of sunglasses from Luxottica.

Originally from South Africa ZAC HILON formed the band ‘No Way Out,’ which opened for Duran Duran and toured South Africa and it’s neighbouring countries. HILON has performed at some of the biggest venues in Las Vegas and has performed on “Gimme The Mike” a FOX TV network. He moved to Los Angeles, landing regular appearances at The Universal Studio City Walk and

Addi herself walked on the runway in her designer Monarch Butterfly ball gown created by Uber Glam Fashion Design School with New York based model Jacques Compaan, Gareth Speight, Sello Masterp, Ray Wale Smith, to the song called “FOREVER CHANGED” that was for this segment that has been written by recording artist Aly Cook – 5 Times Nominated New Zealand Female Country Artist of the Year (Awarded 2012) and NEXT New Zealand Woman of the Year nominee (Arts & Culture) 2011. Performed by Aly Cook with musical backings from The Dions and recorded in September 2015 at Bay City Sound Studios in Nelson, New Zealand. The song is produced by Mark Patterson and released by Futures Entertainment. Studio filming was done by Horizon Aerial Imaging in Nelson, New Zealand. Artist Co-Ordination Key 2 Artist Promotions is Therese McKee based in Australia. The Forever Changed Documentary includes this as the title song and Aly Cook will continue to support the campaign by donating a portion of the sales of the song.

“Creativity in its purest form needs to find its way to this stage as art, fashion and music with a message” was the creative brief from TV Producer Tami Lane, with choreography by Elsubie Verlinden.

Creative Show Director Deeno Naidoo owner of Blue Indian Pictures said “it was not the norm to experience so many professionals collaborate to produce such a sterling event. Well over 30 companies that are usually in competition with each other, working together for a common purpose in support of a beloved friend and colleague. Wow, so much to be learned about the nature of mind and human spirit”.

HILON has just signed a management deal in Europe and will be recording his upcoming album in France & Switzerland. He is a prolific songwriter and his songs are currently on radio playlists in the USA, Australia, South Africa, United Kingdom and Israel.

Blue Note Events hosted both Dress4Life and the Forever Changed Press Conference about Addi’s journey of becoming a reluctant warrior through medical negligence and had already undergone surgery and chemotherapy when she landed up with 2 fractures in her legs as a side effect of the chemotherapy. She then stopped all chemical treatments and researched alternative options and felt the need to warn others about their health rights. Addi feels that whilst it is too late for her to change anything for herself after already having chemotherapy it is through the Forever Changed campaign that she has found meaning and purpose to save one life at a time and to try and warn others so that they do not have to go through the pain and suffering that she has over the past year. It is also very important for her to share her story with passion that there is a life after diagnosis and can be one of hope and believes she is creating a butterfly effect. She is inspired by the biological miracle of butterflies and believes that “we are all butterflies having a human experience. I am blessed to have so much support across the globe with VIP Brand Ambassadors Kim Zabow Witkin in Perth, Australia and Casey Kampel in LA, USA and Isabelle Doll – Ngcobo in Atlanta, USA.

Written on behalf of the Forever Changed Campaign.